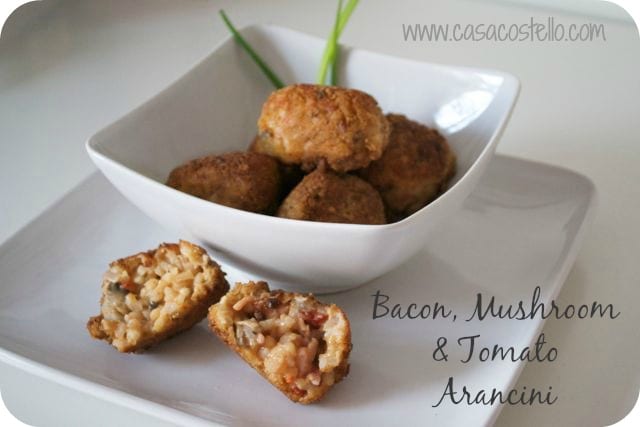 If I had to describe Arancini, I’d say they are Fried Risotto Balls. I have to admit when I saw what they were, I did think was it worth the effort – Risotto is one of my most favourite meals and I couldn’t see that by frying it in breadcrumbs, it would be improved greatly. I was really surprised how nice they were though – Still not 100% convinced they are totally worth the bother and not certain I would ever chance making them for guests, but lovely nonetheless. I think Arancini are supposed to be served as a snack but they are filling and would be fine served with a tomato and onion chutney perhaps with a side salad as a main meal (About 3 balls per person would be fine).

I used my favourite risotto recipe but added some plum tomatoes as I thought the balls might be a little more tasty. I think the addition of the tomatoes made the risotto a little more liquify than I could have done with – The actual rolling of the balls is a messy nightmare and I was chunnering to myself the whole time that there was no way they’d stick together – BUT THEY DID!! I’m amazed and more than a bit chuffed with my self.

I’ve been a member of the Daring Bakers group before but had to stop when I got so busy with cake orders. I’ve joined again for this year though and have also signed up for the Daring Cooks challenges. Today people all over the world are posting about their experiences making Arancini. This month’s recipe suggestion came from Manu of Manu’s Menu 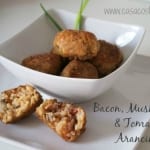 Linking this recipe up with Emily’s Recipe of the Week: